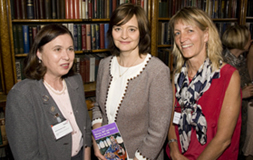 In June 2008, the SOPHIA Forum held a small reception for key women from different walks of life, to explore issues facing women and girls around the world in relation to human rights and HIV.

“It’s shocking, isn’t it that in all these years there is still so much stigma against people with HIV in the UK. I defended someone with HIV in a case 20 years ago and yet here we are hearing that there is still the same stigma in the UK now. The UK has a reputation as a liberal country: we need to question that assumption. It is shocking also to hear of the violence against women connected with HIV. We have heard about the woman with HIV whose partner was prepared to leave her because her HIV status would be bad for his business. We also need to remember the huge issue of trafficking of women into the UK for the sex trade and the grim realities of their lives. The human rights issues surrounding HIV and AIDS in relation to women are immense and I am glad to be a part of this SOPHIA event this evening which is seeking to raise awareness of these issues.”

Here are some reflections from the evening:

“On Wednesday 18 June the Reform Club on Pall Mall was the perfect venue for a special gathering of socially minded female reformers with one clear aim; to ensure that the issue of HIV remains in the public eye.

Special guest Cherie Booth addressed the attendees and expressed her support for the work of SOPHIA, the UK branch of the Global Coalition on Women and AIDS, and spoke of her experiences meeting HIV positive men and women across the world.

As a barrister specialising in human rights law she is passionate about the need to ensure people who are HIV positive get the support they need and are not subject to discrimination. She backed calls for more funding and increased awareness amongst the younger generation, both in the UK and abroad, of how to prevent infection.” 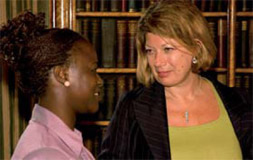 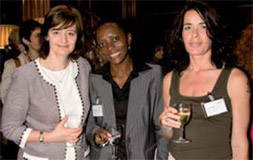 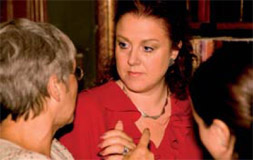 Sara Tye, redheadPR and co-founder of the SOPHIA Forum, with other guests.

“Cherie Booth spoke eloquently and from the heart, without notes, in a way that I had never heard her speak before. It is to Sophia’s credit that on that evening, its members, among them Kate Thomson from UNAIDS and Alice Welbourn, co-chair of Sophia, conveyed so eloquently and with such power and dignity, the continuing plight of many women who are living with HIV and AIDS. SOPHIA speaks on behalf of those who are unable to come out of the shadows and talk openly about their status. Women often maintain secrecy to protect their livelihoods, for the safety of their children and to fend off the consequences of fear and bigotry for their families. SOPHIA keeps reminding us in ways that work so effectively that the battle to secure good health, stability and hope has barely even begun for so many women living with HIV and AIDS. SOPHIA’s impassioned voice is needed as long as intolerance and ignorance continues.”

“Thank you for inviting me to your evening reception with Cherie Booth QC. It was an event that challenged preconceived ideas and personal opinions in many ways. I was very grateful to have been given the opportunity to be part of it.

Being Zimbabwean and working for SABMiller, a company that has employees in many parts of Africa, I am very aware of the devasting impact that HIV and Aids has on the lives of people living in Africa. However, I was completely unaware that stigma and prejudice are such key issues for people living with HIV and Aids in the UK. The personal nature of the event, and the open and honest way that you spoke about your experiences was very moving.”

“The most striking thing about the evening for me was the size (and continuing growth) of the number of people living with HIV/AIDS and the impact this has on their daily lives, despite modern medication enabling them to remain in good health much of the time. I had not realised the degree to which people with HIV/AIDS continue to feel stigmatised and are fearful of the repercussions that might follow if they were to reveal their status. The retail sector prides itself on providing opportunities for the most diverse workforce in the UK, with flexible working arrangements enabling staff to combine employment with other priorities in their lives. Every employer needs to understand the facts about life with HIV/AIDS, how this affects their workforce – and how it doesn’t!”
Jane Milne, Director of Business Environment, The British Retail Consortium

“The Sophia Event was an incredible insight into the everyday lives of women fighting HIV/AIDS both in the UK and worldwide. It was a friendly, intimate get-together in which leaders of various fields had the opportunity to meet on equal terms with women living with the condition and hear their stories.

Not only do women living with the virus have to cope with related illnesses, but they must face prejudice, intolerance and even violence sparked by other people’s misconceptions. The humour, resilience and power of these women was a true inspiration and really hit home the fact that anyone, anywhere can be at risk of getting HIV. Sadly, not everyone is granted the same access to treatment as the women I met. The evening also highlighted the fact that AIDS awareness has slipped almost entirely from public consciousness since the 1980s, with popular belief reverting to it being a disease ‘other’ people in ‘other’ countries or with ‘other’ sexual orientations ‘catch’ by being reckless or ignorant. We really do need to find a way to re-educate mainstream society. HIV/AIDS has not gone away, and is not just a problem for the marginalised. It needs resources and research levelled at it, not only to halt the epidemic itself, but to impede prejudice against people living with HIV in the community and so allow them the same care and concern that someone with cancer may receive from health services, family, friends, colleagues and strangers alike. The Sophia Forum is doing a marvellous job in bringing these issues to the attention of community leaders across the globe, and they are doing it by the best means possible – by using real people, just like you or I, to say: ‘HIV is still here, now what are we going to do about it?’”

“So often we are given a meagre view of HIV/AIDS as something so distant and far from our very own intoxicatingly cosmopolitan lives. The SOPHIA event on the 18th June was so different. It was enlivening – in the most literal sense of the word. The room was filled with women from every walk of life, ready and willing to talk freely, and in turn, listen freely to the issues presented to us. The challenge of raising awareness and supporting all positive people in the UK is a big one: HIV/AIDS is not only the burden of a distant 3rd world, it is part of the here and now. This is what I got most from the evening – a greater sense of the real, present and living impacts of HIV/AIDS in my world.”