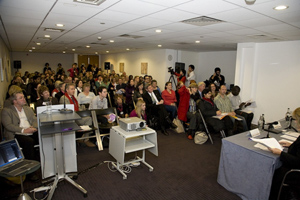 Please scroll to the bottom of this page if you would like to view some photos of the event and download the content of the information pack handed to our guests whilst listening to this speech.

An audio recording of Helena Kennedy’s talk will play here:

If you do not see the audio player – get flash here

“I found Helena Kennedy’s talk rousing and delivered in such a way as to be appealing and accessible to a wide range of people, whether or not they had direct personal experience of living with HIV or AIDS.

I also came away quite profoundly affected by meeting some of the women from PozFem and Positively Women, and reading the literature included in the packs (which I read from cover to cover!) that were handed out.  I would like to know more about the work of SOPHIA and these other organisations, and to be able to offer assistance in any way I can.” Angela Randall (Lawyer)

“I came along to the event to further my knowledge about HIV and AIDS, hear some new perspective, and challenge the views I already had.

As a trainee social worker I have recently become really aware of the issues surrounding transmission, particularly concerning negative media coverage about prosecution, which prevents people from getting tested. This lecture made me aware of all the factors that are in place, particularly from the perspective of a person living with HIV, which is often the forgotten voice in the media, both in the UK and abroad.

One of the best elements of the event was the emphasis upon action, as we can learn about an issue endlessly but it really is action that makes a difference. I took in a lot from the lecture, and have used some of the material and somewhat unknown statistics to talk to my own peers about sexual health and HIV. I have also not only tried to inform but to encourage them in turn to talk to their peers so that we all become advocates for the cause, which was a clear message in the lecture.”  Rhiannon Spencer (Trainee Social worker)

“As someone who works in the commercial legal world, I am not exposed to discussions about HIV/AIDS in my daily life. This lecture was a real eye-opener for me, leaving me feeling personally implicated in the discussions about general levels of ignorance and neglect. So I see this as a call to arms, and hope to involve some of the law firms I work with in the drive to educate and engage.” Caroline Walker (Legal research consultant)

“I was pleased to be able to hear Helena Kennedy speak at the lecture organised by the Sophia Forum recently.  It was an informative and well organised event which attracted an interesting and diverse audience.  Well done!”  Sarah Hayward
Photos by Matthew Gonzalez-Noda, courtesy of Christian Aid, and by Miguel Dominguos

– “Why we oppose Criminalisation“, ICW summary

– “Why we shouldn’t blame Sarah Jane“, by Janet Street-Porter, The Independent, June 2006